All you need are names, addresses and some bags of cereal. A gallon of milk helps, too. 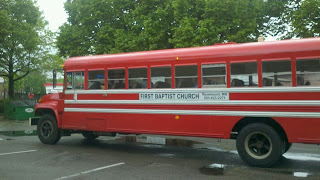 I call this ministry "The Cereal Brigade," which basically means that a team goes out with cereal, milk and the Gospel. If you're like me, you may not be comfortable knocking on the door of a stranger's home, but we're not exactly strangers when that door is on the bus route from our church. Someone from our bus ministry picks up the children from this home every week. That makes us welcomed neighbors!

After getting our assigned names from Bus Captain Austen, soul winning partner Micki and I stopped by the grocery store on our way to visit two families. Coupon in hand, we purchased six bags of cereal and two gallons of milk (It's an even better idea to backstock cereals when they're on sale, if you can). Armed with prayer, Bibles and food, we headed out to visit two Moms from Bus Route Seven, knowing that at the very least, our gifts of cereal and milk would be accepted. I have never had anyone turn down food gifts yet.

Having a GPS makes finding addresses so much easier, and makes it less likely that we'll be driving in circles! We plugged in the address and drove across town to meet two ladies whose hearts had been obviously prepared by the Lord. Since I didn't ask permission to share their names, we'll just call them Mom-One and Mom-Two. These dear Moms were like ripe fruit, ready to harvest.

We started at Mom-One's house, and she had a lot to talk about. She struck me as a person who hasn't had a good conversation in ages. It's good to listen to people. We learn when we listen, and once we've listened, people are more willing to allow us to have a turn at sharing the Gospel with them.

Try something simple like this: "Tell me about your spiritual life." An open-ended sentence such as this often brings out valuable information that will help you to understand the person's background and perspective.

Mom-One described a hard life, filled with financial problems, illness, struggling adult children and more; but instead of hardening her, these things actually made her very open to the Word of God. After having an opportunity to tell us about her life and her family, this Mom was more than willing to have a brief "Bible study." Mom-One knew about God, but had never trusted Christ as her Saviour. Church was something on her "to do" list, but no one had ever opened a Bible and showed her how we are all "whosoevers" that simply need to call upon the name of the Lord and be saved.

It's amazing how many people have never heard that they are a "whosoever."

"For whosoever shall call upon the name of the Lord shall be saved." (Romans 10:13)

Isn't it grand that there is no difference between one person or another in God's sight? "For there is no difference between the Jew and the Greek: for the same Lord over all is rich unto all that call upon him." (Romans 10:12) There is something very encouraging about erasing the imaginary lines that people draw between themselves. No one can claim to be worthy of salvation, so we all have the same neediness when it comes to Christ.

By the end of our Bible study covering several verses of Scripture, Mom-One bowed her head, prayed and asked Christ to be her Saviour. It was a transforming moment in time. We invited her to be our guest at church on Sunday, and left her home rejoicing and praising the Lord for saving the soul of that Mom.

Next stop: The home of Mom-Two.

We crossed the parking lot and knocked on the door. And then we waited. No answer. We knocked again and waited. Just as I was about to give up, a voice behind the door asked, "Who is it?" Bus Captain Austen had told us that Mom-One would be very talkative, but warned that Mom-Two may not want to talk with us on the first visit. I was prepared to be turned away, but when this young Mom opened the door, she looked like a child herself. That brought out "the Mom voice" (you know, the authoritative voice that Moms have when we need to sound like we're in charge).

"Hi! I'm Brother Austen's Mom from First Baptist Church, and he gave us your name to stop by with some cereal and milk for your family."

Her eyes lit up with recognition (she later told me that she could tell that I was Brother Austen's Mom) and she invited us in. As we handed over the grocery bags, I asked her if she had time for a little "Bible Study." It's hard to tell people "No" when they're handing you gifts.

My teammate Micki got busy distracting three bouncing little girls, while Mom-Two and I sat down at the kitchen table and visited a bit before starting our Bible study. This Mom also described a hard life, but her life was harder a lot faster. At the mere age of 26, she already had three children by three different fathers. "I was looking for someone to love me," she said with a tone that was mingled with pain and confusion.

Can you understand that? It is possible to comprehend, with God's help. Like the woman at the well (John 4:16-18), this young lady had no husband, but plenty of men in her life. "I'm looking for God now," she told me with sincerity. Mom-Two started her search for God one week before we arrived, calling a phone line that provided Bible verses. As far as this Mom was concerned, God had sent us to her.

I'm convinced that she was right.

After spending time in the Word, taking our time with her questions, there was a knock at the door. It was Bus Captain Austen, stopping by with the flier for Bus Seven. He arrived just in time to join us as Mom-Two bowed her head at the dining room table, asking Christ not only to save her, but to help her to learn how to live. There is something extra-special about listening to someone speak to Christ in their own words, pouring out their own heart before Him. And it's equally special knowing that God is willing to hear and answer such a prayer.

Guess who was sitting with me in Sunday school that next morning? Mom-Two.

Would you like to start your own brigade? It's easy: Ask your bus captains for the names and addresses of the single Moms on their bus routes. If your church doesn't have bus routes, pick any family in need. Purchase some simple food items, prepare with prayer, and then head out with a partner to make the visits. You will be welcomed more often than not, and with your Bible in hand, you'll be ready to deliver spiritual food with physical food.

You can do the same thing with any kind of gifts:
--Gas cards (if the family has a car)
--Peanut butter, jelly and a couple of loaves of bread
--Cake and ice cream (for a birthday of a child in the bus ministry)
--Grocery store gift cards
--Homemade baked goods

We can easily spend $10 per week on items that aren't necessities. How about designating those dollars for souls instead? It takes less than ten dollars to start your own Cereal Brigade. Not every visit turns out like these, but our job is just to go and tell, as often as possible. "So then neither is he that planteth any thing, neither he that watereth; but God that giveth the increase." (I Corinthians 3:7) We're just the "delivery people." The outcome is entirely up to God.

Set aside any discomfort about knocking on doors, remembering that the eternal destination of a soul may be changed by your special delivery.

Popular posts from this blog

Moving is Not for Whiners

April 30, 2018
When I woke up for the first time in my new town, I said to myself, "Where am I?" Now mind you, this is not really a new thought for me, as I often wake up in conference hotels and wonder which state I'm in (other than the state of confusion). But now, I was really wondering about this strange bedroom with the lovely little armchair next to the closet. I didn't recognize a thing in the room, and that's when I remembered... ...I've moved. February 2018 My new hometown doesn't feel at all like home, but I will give it time. It took months of prayer for the Lord to lead me to even consider moving, which eventually led to a position as editor for the Joyful Life Sunday school curriculum at Abeka Books in Pensacola, Florida. Decision day was January 31, 2018. And then a whirlwind. And then a huge moving truck. And then I boarded a flight because in the process of planning this move, I had forgotten all about
30 comments
Read more

Parents Are Not Responsible for That

September 13, 2016
Parenthood is not a role for wimps or whiners. There are the exciting times such as music recitals, sports tournaments, and graduations. But if your tribe is like ours, you've probably also had the maddening moments, like the time one of our children discovered how to unfasten the tapes on his diaper and used the contents as "chalk" on the bedroom  wall (yes, it was "his," so that narrows the field of suspects). Children are young for a few blinks, and then we spin around and we're hearing "Pomp and Circumstance," that familiar graduation march as our "babies" walk down the aisle in cap and gown. If they choose to go on to college, four snaps later, we're sitting in the auditorium at their college graduation, scanning a long list of names in the commencement bulletin while waiting to watch them walk across the platform to receive yet another diploma. It's warp-speed fast (except that diaper stage). Parents don't min
45 comments
Read more

September 26, 2017
I find myself praying in questions lately. "Lord, what just happened here?" (This time last month, we were walking a sandy beach in Florida, calling it our "last anniversary vacation.") "Did you REALLY take my Norman ALREADY ?" (I spent way too much time on Google, and all the articles said that Norman had a chance of surviving at least a year.) " LORD , are you SURE I can endure all this excruciating pain?" (I'm certain that I cannot bear this, but obviously, if I'm typing, I'm still bearing this somehow. Only God.) The last anniversary vacation Now here's what I do not want after you've read this: platitudes. Absolutely no platitudes. (Platitude: Overused statement applied liberally and repeatedly in an attempt to comfort or instruct. Paraphrased definition.) Example: "Heaven is getting sweeter." I understand that this is a phrase from a song, and it is not offensive in any way. It j
26 comments
Read more